By Alex D. December 15, 2015
A well-known proverb states that “Walls have ears”, meaning, eavesdropping can occur when you least expect it. But how many times have you found yourself wondering about the stories different object could tell us, if they could only talk? Take, for example, this red fire hydrant.

I recently became aware of this cool startup that enables water pipes to listen to themselves, analyze the sounds retrospectively and figure out useful things. 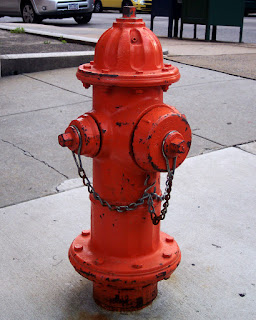 Take a look at this hydrant: it’s red, neat, and does nothing to indicate what is going on beneath the surface of the sidewalk, for example - a leak! A leak from water pipes is problematic to say the least, but it some areas of the globe it can be dangerous and extremely costly.
A startup called aquarius-spectrum has invented the technology to allow any pipe outlet to literally listen inside, and the results can be very surprising! This technology is so sensitive that it can distinguish between minor water leakages along pipes embedded deep underground.
Personally, I was amazed by what this startup does!

When this technology is combined with modern internet technologies, a human operator in the office can be informed of the existence and location of a leak. The heavy lifting is performed by computers, and the bottom line is that the field operator acquires accurate coordinates of the location of the leak and fixes the malfunction.
Here is the movie.

Popular posts from this blog

By Alex D. February 23, 2017
When there is a job for Lab Fairy it doesn't matter whether it's in the Noth or in the South - Lab Fairy packs its tools and embarks for an assignment! This time Lab Fairy has got a call from Ben-Gurion University of the Negev.  It's a pure pleasure to work with a professional lab manager Having boarded a train heading South, the Lab Fairy had an hour ride to Beer Sheva. At the campus which is shared by hospital and university, Lab Fairy was met by amazing lab manager - Ronen Schuster. Ronen was so positive and cooperative that Lab Fairy had a true pleasure of working with him. Ronen accompanied us to the lab and gave very accurate instructions, so the expectations on both sides were very clear.  Lab Fairy plunged into work. Lab Fairy's target was a fridge full of antibodies. On previous  Lab Fairy  assignments,  there were containers  mostly  with chemicals, therefore dealing with the new type of inventory items made it even more interesting and exciting!
121 comments
Read more

By Alex D. April 20, 2017
Good news!!! We're flying to Vilnius, Lithuania to take part in LOGIN Fare, which will take place on 24-26 of May!!! Special thanks to  Startup Lithuania  team for organizing the pitch battle event at Tel Aviv and granting a winning place! LabSuit will have a great company with the other two startups from Israel, Distribyte , and SwitchRTC . We've got some introductions to PI's at Vilnius University, so we plan to get back with new labs that would fall in love with LabSuit! Read more here at the official Startup Lithuania page: http://www.startuplithuania.lt/en/news/switchrtc-distribyte-and-labsuit-coming-to-login-startup-fair-from-tel-aviv
20 comments
Read more

By Unknown December 13, 2016
As long as barcode is not a feasible solution for many labs yet, LabSuit has it's own solution for chemicals labeling!  Meet solvent-resistant LabSuit labeling stickers!  LabSuit stickers will last for years and won't fade in the sun.  LabSuit stickers are solvent-resistant and if used with a proper marker-pen will save you hours of painful search for chemicals! LabSuit stickers play a role of connecting chain between your actual inventory and its digital representation! Having every bottle in your lab labeled with or stickers ensures you don't loose your chemicals tracks!   Did I say that we have a specially trained team of lab-fairies that will deploy LabSuit labeling stickers at your lab? Learn more about LabSuit lab fairies!
2 comments
Read more

An official LabSuit blog. LabSuit is platform where LifeScience research labs manage their inventory and gain back control overt their ordering process