Even Lab Researchers have their WOW! Moments 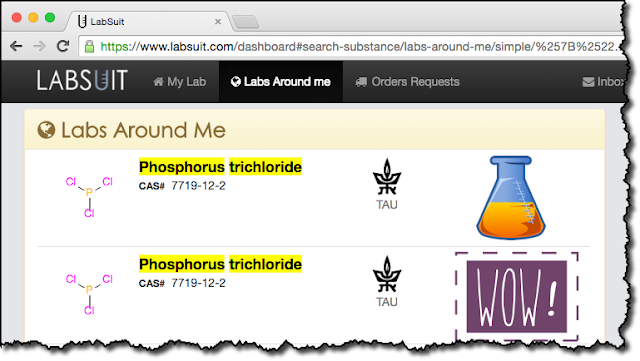 “Labs-Around-Me” is a sharing economy concept for the world of research laboratories. Such labs can share chemicals, antibodies, plasmids and more, with other labs around them.

As LabSuit's concept of “Labs-Around-Me” has evolved, more and more researchers have experienced  amazing WOW! moments when they begin to understand the benefit of our platform.

True Story
This is a story of something experienced by a LabSuit subscriber not so long ago.

As we all know, “Labs-Around-Me” allow facilities and researchers to participate in a special LabSuit community. The community includes hundreds of labs - and, through a simple interface, allows them all to collaborate in locating and exchanging chemical reagents.

Events begin in December 2015
Every day LabSuit delivers hundreds of messages between universities - as well as internally, within the same campus. Researchers ask questions about chemicals, buffers, and sharing protocols. Most often, they courteously request small amounts of some hard-to-get reagent.

May I borrow a little phosphorous trichloride?
This banal message was the first to be seen by a masters student from a lab at Tel Aviv University, while eating her breakfast. A post-doc from Ben-Gurion University (Southern Israel) courteously asked to share a few milligrams of reagent called phosphorous trichloride, (PCl3). This chemical compound is used in preparation of herbicides, plasticisers and more. The post-doc explained that he urgently needed PCI3 for his research - since his post-doc position was coming to an end, and he urgently needed to finish his work.

More requests for PCl3
The event was nothing unusual - until two weeks later when the same lab received another request for PCl3! This time the message was from a desperate post-doc at Israel’s Technion, in Haifa. Apparently, he had contacted every chemical supplier in the country, but none had any PCl3!

Well, such coincidences happen, and it's not that rare that two labs need the same reagent almost simultaneously.

Help me complete my thesis!
To LabSuit’s surprise, it happened again one week later! This time a PhD student needed a small amount of this mysterious PCl3 for his final thesis experiment.

Then, we at LabSuit began to wonder. What’s so special in PCl3 and why does everyone suddenly need it? 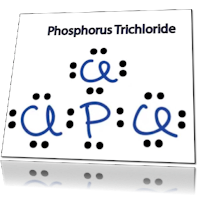 We decided to contact the PCl3-friendly lab at Tel Aviv University and ask the principal investigator what was so unique about this reagent.

"When I launched my lab not a long time ago, I knew I would require phosphorous trichloride throughout the whole of next year for my research. PCl3 cannot be shipped by air transport but only by sea! Therefore, each delivery may take up to six months. My lab ordered enough PCl3 in advance, that's how, I think, my lab has become a primary source of PCl3 for other labs  :-)"


LabSuit Turns the Model Upside Down
Usually the opposite is more common; when a new investigator joins a faculty and starts his/her research, Labs-Around-Me helps him/her get the reagents from nearby labs. However, this case was different: the Tel Aviv lab was headed by an enthusiastic young professor who became the only source of PCl3 in Israel for an entire half year - while commercial suppliers were waiting for it to arrive by sea.

During the next several months more PCl3 messages filled LabSuiters's inboxes and all of them got their own special happy-end - often, in the form of a published paper!

Just WOW!
Being able to share and exchange resources so easily was a WOW! moment for so many of the researchers involved. That’s when they realized the full benefit of LabSuit’s services.

Web-Based Platform for Increased Efficiency
Labs-Around-Me cooperates with ICS (Israel Chemical Society), to create a web platform, where labs can find and exchange reagents they need. It’s highly efficient, time-saving and resource-friendly. Often labs, need a small amount of reagent, to conduct a preliminary experiment, kind of proof-of-concept before buying a large amount of the reagent.

Here, at LabSuit we felt great satisfaction, since we helped several labs get what they needed in the shortest time possible, eliminating long delays. Moreover, LabSuit tightened the relationship with these labs, leading to even more fruitful collaboration.

Popular posts from this blog

By Alex D. February 23, 2017
When there is a job for Lab Fairy it doesn't matter whether it's in the Noth or in the South - Lab Fairy packs its tools and embarks for an assignment! This time Lab Fairy has got a call from Ben-Gurion University of the Negev.  It's a pure pleasure to work with a professional lab manager Having boarded a train heading South, the Lab Fairy had an hour ride to Beer Sheva. At the campus which is shared by hospital and university, Lab Fairy was met by amazing lab manager - Ronen Schuster. Ronen was so positive and cooperative that Lab Fairy had a true pleasure of working with him. Ronen accompanied us to the lab and gave very accurate instructions, so the expectations on both sides were very clear.  Lab Fairy plunged into work. Lab Fairy's target was a fridge full of antibodies. On previous  Lab Fairy  assignments,  there were containers  mostly  with chemicals, therefore dealing with the new type of inventory items made it even more interesting and exciting!
121 comments
Read more

By Alex D. April 20, 2017
Good news!!! We're flying to Vilnius, Lithuania to take part in LOGIN Fare, which will take place on 24-26 of May!!! Special thanks to  Startup Lithuania  team for organizing the pitch battle event at Tel Aviv and granting a winning place! LabSuit will have a great company with the other two startups from Israel, Distribyte , and SwitchRTC . We've got some introductions to PI's at Vilnius University, so we plan to get back with new labs that would fall in love with LabSuit! Read more here at the official Startup Lithuania page: http://www.startuplithuania.lt/en/news/switchrtc-distribyte-and-labsuit-coming-to-login-startup-fair-from-tel-aviv
20 comments
Read more

By Unknown December 13, 2016
As long as barcode is not a feasible solution for many labs yet, LabSuit has it's own solution for chemicals labeling!  Meet solvent-resistant LabSuit labeling stickers!  LabSuit stickers will last for years and won't fade in the sun.  LabSuit stickers are solvent-resistant and if used with a proper marker-pen will save you hours of painful search for chemicals! LabSuit stickers play a role of connecting chain between your actual inventory and its digital representation! Having every bottle in your lab labeled with or stickers ensures you don't loose your chemicals tracks!   Did I say that we have a specially trained team of lab-fairies that will deploy LabSuit labeling stickers at your lab? Learn more about LabSuit lab fairies!
2 comments
Read more

An official LabSuit blog. LabSuit is platform where LifeScience research labs manage their inventory and gain back control overt their ordering process